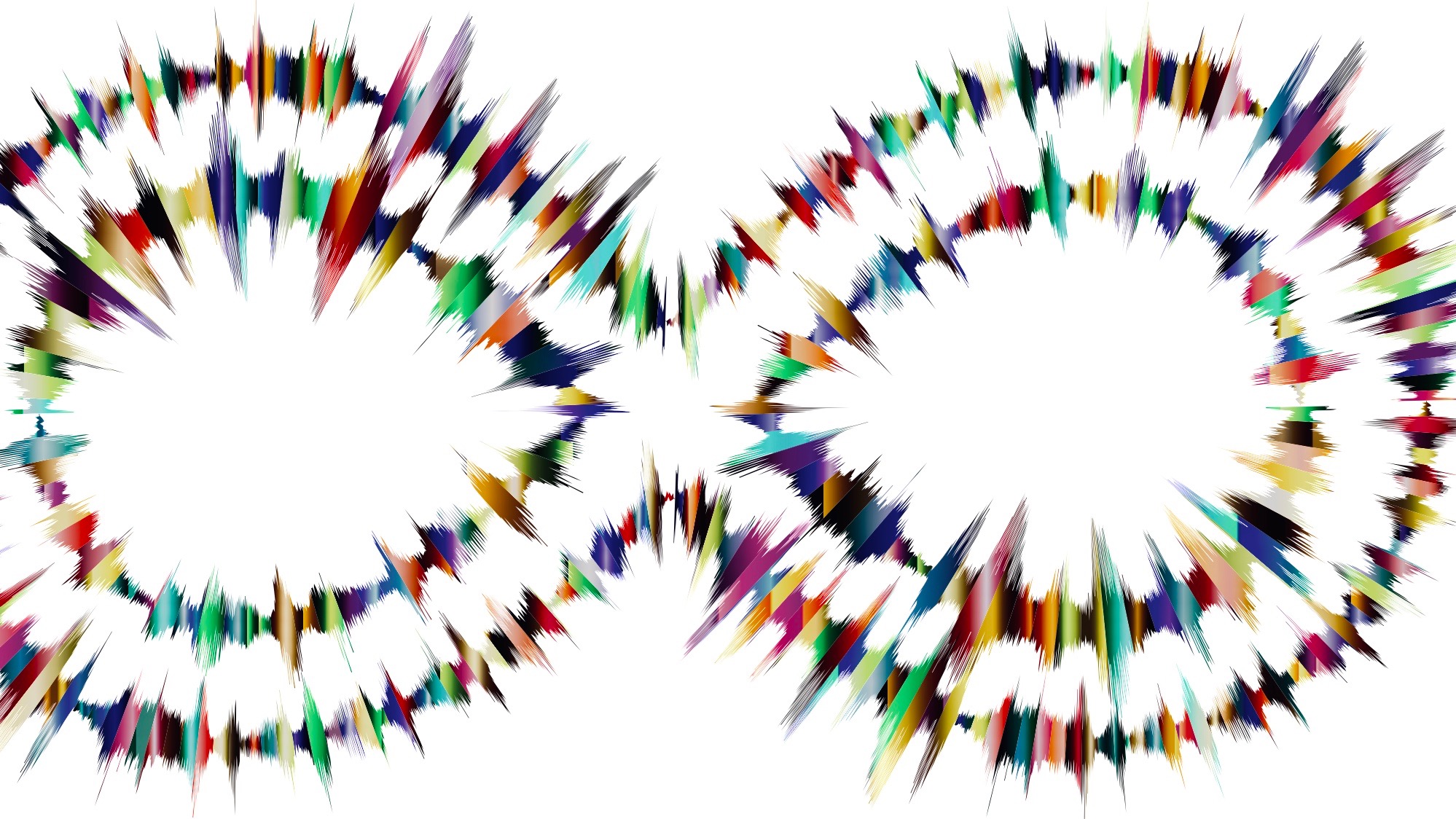 Imagine a world where no artist dared to be influenced or inspired by another artist that came before them? In music, there would be no Beethoven because there was no Mozart. Today there would be no Coldplay without Travis. What shallow, narrow-minded rubbish would constitute music in such a sad and fearful world? Nothing could ever come before… There would be no springboard for the new. Art and music would be perpetually dysfunctional wheels reinvented without context.

Who will be next?

Who will be the next target for litigation with these new abstract parameters? Actors perhaps? I’m sure there is equal scope there – indeed the definition of “acting” pretty much ensures there is. Painters? What about use of colors, mood, feeling and subject matter…. hmmmm “red” “blue”  “melancholy” “abstract” “male” “female”  “sunflower” yup – endless scope for “infringement”. Designers? Filmmakers? No creative work will be safe unless these new blurred abstract concepts are returned to rational rules.

You must be wondering if there is a justification for all this fuss. I’m putting the audio of both tracks from the case that changed the game down below so you can listen for yourself.

Personally, I agree with the outnumbered appellate judge, Jacqueline Nguyen and don’t think they are the same. I do however accept that they have both used a distinctive sounding instrument (in their percussion – the tin cow bell) and thus sound somewhat similar. But “similar” is not “the same.” And “similar” in human evolution as in art is about change and progress. Necessary for evolution.  Essential for growth. Critical for survival.

What if this song never existed?

I agree that the loss of the music video, Williams’ and Thicke’s interpretation of their song, would be no loss to the world whatsoever. But that is not what this question, or this post, is about. This is a hard question to answer. How can you tell across time what the precise effect any single act has on everything else. Chaos theory suggests that there is significant impact. My mentor, Milton Glaser and many Buddhists advocate “One thing leads to another and everything is connected.”  And, I just watched “Its a Wonderful Life” again recently which is based on that very premise.

Here are three things that I can guarantee would not exist…

I have always preferred my friend Toni and Project Orange’s cover of this song. If it wasn’t for her cover I wouldn’t have made this cute wee video with my kids and their friends and a big old box… that reminds them of simple pleasures and taught them about the magic of editing…

And Weird Al Yanovic wouldn’t have made this brilliant video on literacy in a time when grammar is no longer taught in schools (I’m talking about in the US – I’m sure the developing countries have such essentials covered. Developing countries… hmmm, I guess that means we are not developing… which means we are in decline… what a depressing thought – but I diverge) and at the same time smart phones are dumbing down the population at an alarming rate. LOL LMAO WTF …

And Post Modern Jukebox wouldn’t have created their Blue Grass version (that really makes me question the courts what are you thinking about?). It certainly doesn’t have any relationship with Marvin Gaye’s song, in fact it demonstrates the essence of Blurred Lines has even greater difference.

The Future of Copyright Infringement

Where will this lead. Perhaps the progression of all this is that future musicians and songwriters cannot use the same instruments is they sound the same or any chords anyone has been used before… or maybe even the same number of beats in the bar… because they absolutely will be infringing on something they can be sued for under these vague parameters. What would that mean? That would surely mean the death of music, would it not?

How far must things go before there is no longer money to be made? The answer to that will likely determine if things are encouraged to continue on this trajectory… (Oh I’m such a cynic!)

One Thing Leads to Another or Everything is Connected

A lecture title by Milton Glaser. A truth if you work in a creative field like I do. Absolutely everything is connected. Of course one thing leads to another. How can it be any other way? Creative imaginations just make connections that others don’t, but the connections exist and are there to be made. Creative growth and development rely on what has come before informing and influencing them.

Ubiquitous Interconnection is revealed by The science of “vibes”

Sometimes a person, creature, or thing really resonates with you. Full article

In a Dec. 5 post in Scientific American entitled “The Hippies Were Right: It’s All About Vibrations, Man!” lawyer and philosopher Tam Hunt explains a new theory of consciousness he developed with his colleague, psychologist Jonathan Schooler, at the University of California at Santa Barbara.

(I’m hoping… you can’t be sued for being conscious can you?)

Creative Strategy? A fancy workaround. What could that look like?

Option One. Follow the UK and at least use academic scholars to determine legitimacy on decisions that could lead to the obliteration of art. And, combine this with requiring a unanimous decision at appellate level (not majority) because of the seriousness of the outcome. (Can you tell I’m mad about this?)

Option Two. Capitalize on the freedom that religion has here in the states and start a new religion worshiping Creativity… followers could be called Creatives… core values wrapped around connection, community, generosity and continuity, pillars – honor your inspiration, do no harm, be kind … (That could be cool.)

Option Three. We could all agree not to pay insurance companies and not to sue each other. (Ha!)

Option Three B. The Gaye Estate and all subsequent winners of a similar cases could publicly give the awarded money back and draw a sharp line in the sand to protect the future of humanity. (Make my day!)

Option Four. All American artists and composers move to Scotland or another safely out of reach country. (Go Scotland!)

Option Five. If the Hunt and Schooler theory is true and everything is connected, then perhaps nobody owns anything since the beginning of time and there can be no intent because everything is a vibration and we can’t help but spontaneously align… (Thank you science!)

What do you think? Option Two? ;-) Option Four? Ahhh! Option Five! No? Perhaps something else altogether? Comment down below…

Footnote. I would like to link to this essay “Influence, Imitation and Plagiarism” but it doesn’t exist online, it can only be found in his back Art is Work by Milton Glaser. I recommend reading the full essay but here is the bit I thought was useful to remind the legal system of  important boundaries in art and hopefully encourage them to move the lines back and refrain from doing immeasurable harm. 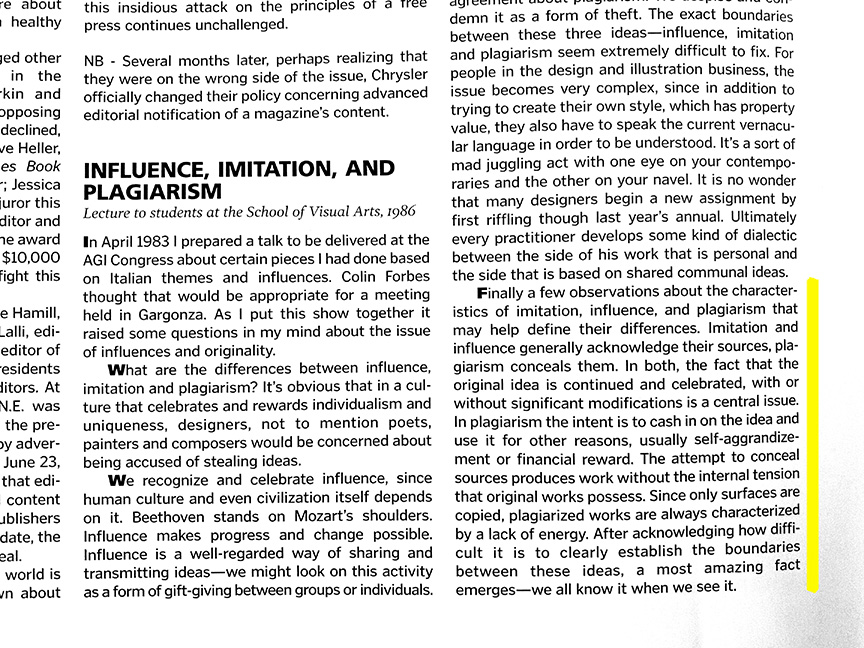