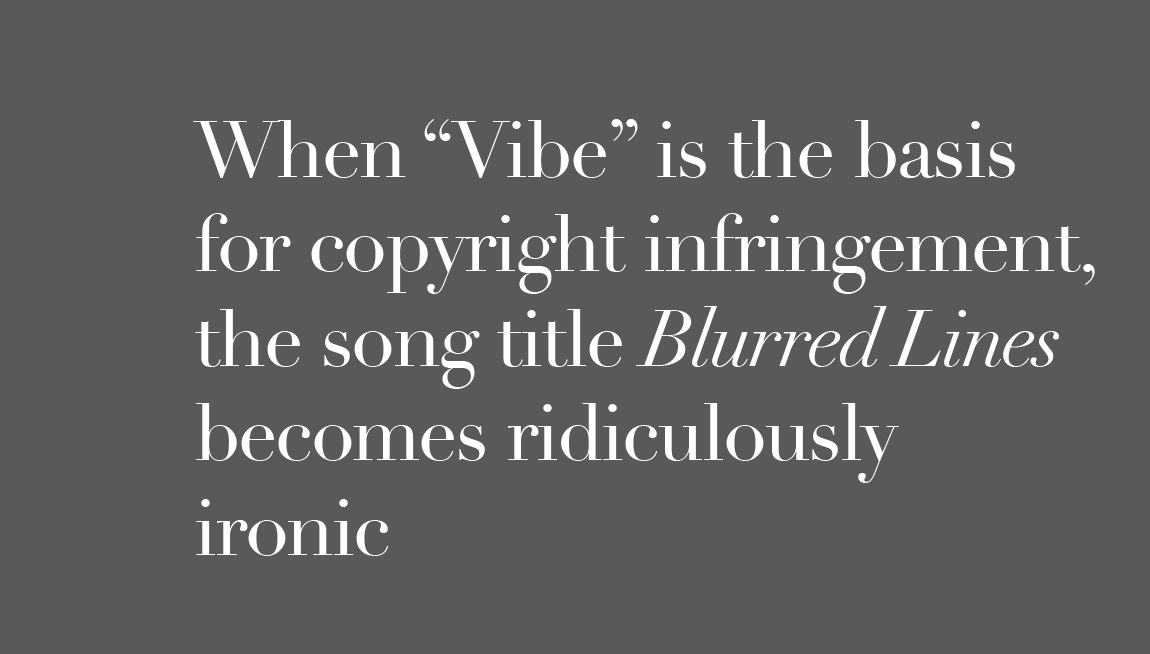 I just stumbled on an article about a music copyright infringement case and wondered whether this law suit will ultimately result in the death of something important. Something that can propel change, transform understanding, bring people together and inspire generations? Could this bring about the death of music? Am I over reacting? Or am I right to be worried?

When “Vibe” becomes the basis for infringement, the song title Blurred Lines is ridiculously ironic

The Rolling Stone article (found here) tells the story of a 2013 song entitled “Blurred Lines” by Robin Thicke and Pharrell Williams. Following its success, the artists were accused of infringing the copyright of a Marvin Gaye song called “Got to Give it Up” which they openly talked about as having inspired them to write the song.

In the five years since a court ruled that “Blurred Lines” infringed on Marvin Gaye’s 1977 “Got to Give It Up,” demanding that Thicke and Williams fork over $5 million to the Gaye estate for straying too close to the older song’s “vibe,” the once-sleepy realm of music copyright law has turned into a minefield.

What does this mean going forward? Apart form the surge in law suits and an obvious massive win for insurance companies… it could mark the end of music – couldn’t it? The Guardian, reporting on the outcome of the appeal, quoted the two-to-one outnumbered appellate judge, Jacqueline Nguyen…

Jacqueline Nguyen, argued that the songs “differed in melody, harmony and rhythm” and said the verdict “strikes a devastating blow to future musicians and composers everywhere”.

A devastating blow… A blow that devastates… To devastate – to destroy or ruin. “The city was devastated by a huge earthquake” Perhaps the future, the dictionary example of the word in use will read “Music was devastated by the Blurred Lines decision.”

Copyright used to be about protecting lyrics and melody against plagiarism and exploitation. Infringement meant that if you deliberately concealed copying a lyric or a melody you found yourself in trouble – fair and square. Sound reasonable? Yes, I think we’d agree.

Far more abstract qualities of rhythm, tempo, and even the general feel of a song are also eligible for protection — and thus that a song can be sued for feeling like an earlier one.

I question “eligible for protection.” Is this reasonable? How can this be right? This is no longer about plagiarism. How can courts justify putting influence and other abstract qualities of art like mood or feeling on trial before a jury. It boggles the mind. I have always believed that opinion and criticism was the domain of critics not the courts. Am I that naiive?

Lets not forget the purpose of a legal system in society… Quick search on Google reveals:

Laws provide a framework and rules to help resolve disputes between individuals. Laws create a system where individuals can bring their disputes before an impartial fact-finder, such as a judge or jury.

A framework – something strong and supportive. Rules  – a set of explicit or understood regulations or principles. Impartial – unbiased, fair and just. A fact – something known to be true.

What constitutes “straying”? How close is “too close”? Exactly what defines a “vibe” and which “vibe” are we focusing on? How impartial, or indeed partial, must you be to answer these questions? What vague ideas rather than “facts” are you having to interpret? Blurred Lines indeed.

How can this be “law” – be explicit, be unbiased, fair and just, and be known to be true? Are we not risking the destruction of one of society’s cornerstones and humankind’s great differentiator (creativity/artistic expression) on something vague, ambiguous, unfair and unknown? At this rate Marvin Gaye’s name will become the scorn of music, composers and musicians – hardly a legacy an artist deserves. The only fact that remains is the no composer can compose or songwriter write because nothing is original and the building blocks are now incendiary.

Who stands to gain from this? Certainly not society. Certainly not artists. I’m leaning towards thinking that the insurance companies are in serious financial trouble and looking for the easiest target to drain wealth from to stall going under. Errors and omissions insurance is now running …

What will the outcome be?

Art:
1. the expression or application of human creative skill and imagination, typically in a visual form such as painting or sculpture, producing works to be appreciated primarily for their beauty or emotional power.
2. the various branches of creative activity, such as painting, music, literature, and dance

Copyright:
The exclusive legal right, given to an originator or an assignee to print, publish, perform, film, or record literary, artistic, or musical material, and to authorize others to do the same.

Influence:
A (person or) thing with the capacity or power to have an effect on someone or something.

Imitation:
The action of using someone or something as a model. “a child learns to speak by imitation”

Plagerism:
The practice of taking someone else’s work or ideas and passing them off as one’s own.

1 thought on “Copyright Infringement or Death of Art? Part One”